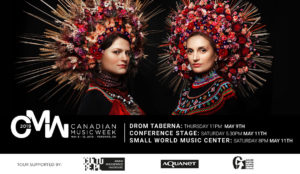 Poland and Ukraine are neighbouring countries both of Slavic origins with similar languages and customs. When exploring these roots in search for musical inspirations you will find a multitude of surprising similarities and differences that emphasize their uniqueness. This is exactly what you will find in the songs of DAGADANA a band that attempts to blur the boundaries and build bridges that will connect both nations (since as it is known the dynamics between them would vary a lot). DAGADANA have found their inspiration in numerous sources: modern electronic jazz contemporary music roots music found amongst their families and friends at ethnic music workshops as well as on the bookshelves of their friends and families. From the very beginning their philosophy has been based on meeting and exchanging music and art experiences from all over the world while being the ambassadors of Polish and Ukrainian cultures. DAGADANA won polish most prestigious Fryderyk Award in the World Music Album of the Year and was nominated for the Phonographic Debut of the Year. They released 4 albums. The latest one “Meridian 68” album hit #48 at World Music Charts Europe and #14 at the Transglobal World Music Charts.
DAGADANA played concerts in places such as Moroccan deserts The Forbidden City in China at the Brazilian Virada Cultural and at numerous other spots. More than 700 concerts. 23 countries.

Highlighting the sounds of our #MusicCity — and beyond. Featuring

Tix: $15 at the door or free with CMW wristband (subject to capacity)
@ Drom Taberna
458 Queen St W (at Augusta Ave)
Doors open at 7
First act at 8
DAGADANA performs at 11 pm

Thanks, too, to Small World Music Society and Lula Lounge.

This event​ is in partnership with Polyphonic Ground, 10 GTA-based presenters of culturally-diverse music. PG is made possible through grants from Canada Council, Canadian Heritage, Ontario Media Development Corporation and the Toronto Arts Council.

DAGADANA’s Tour is supported by: